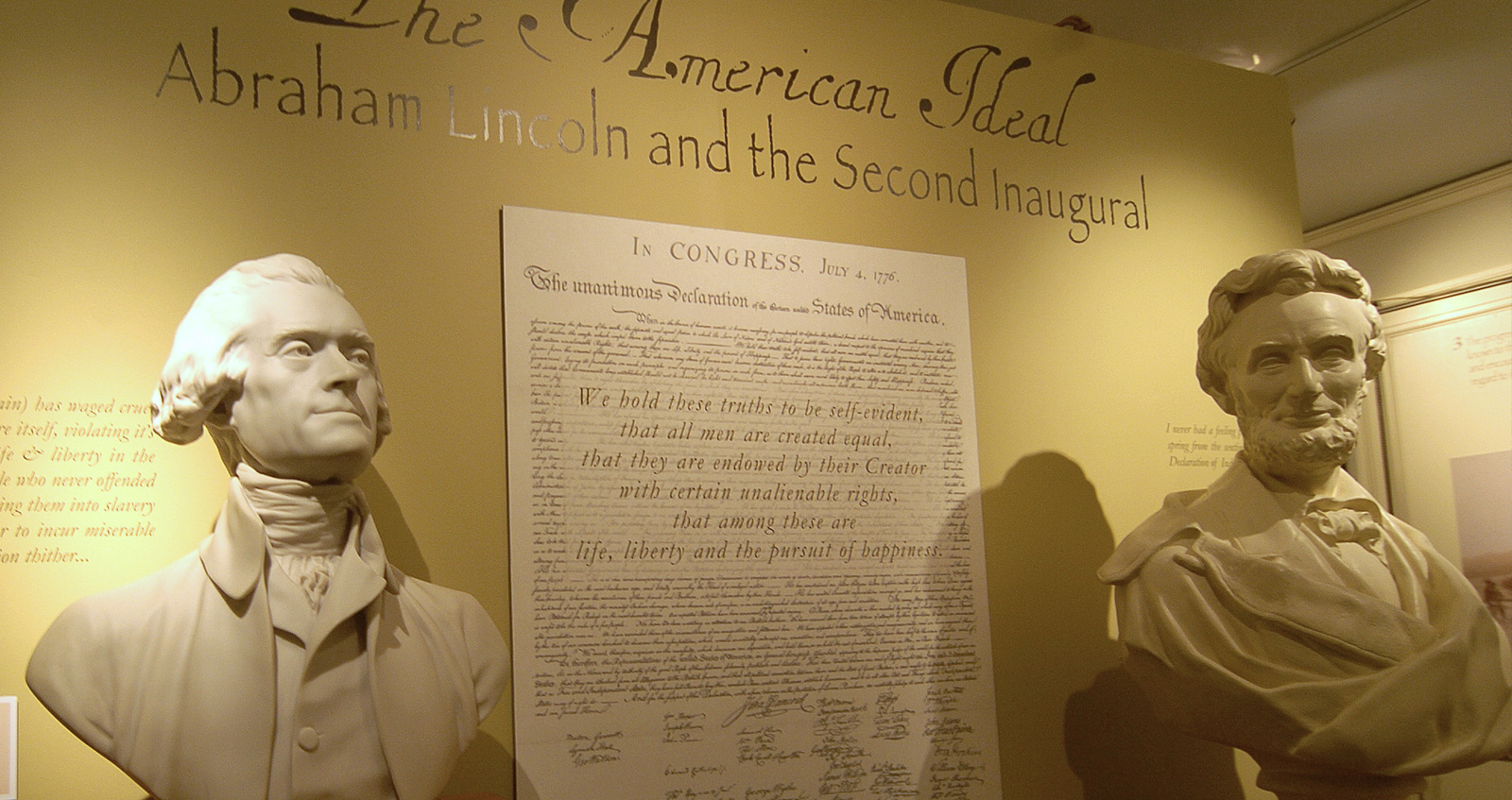 Abraham Lincoln and the Second Inaugural

Although this exhibit has many intriguing artifacts, it is not about those artifacts; it is about Lincoln’s words. The artifacts are there for the purpose of helping to illuminate the power of this greatest presidential speech ever made.

The text of the speech is broken down to thirteen clauses and each is printed high on the walls around the room, prominently displayed and numbered.

Lincoln delivers his second inaugural address on March 4, 1865. He knows the war is virtually won. Lee’s lines are stretched thin from Petersburg to Richmond. Thousands have gathered at the capital. Many are veterans or the parents of sons who may have been wounded or killed in defense of the Union. They are no doubt expecting a self-congratulatory speech about having led the country to victory, putting the rebels in their place and perhaps about post-war punishment for those who visited this calamity on the nation.

That is not what they get. Lincoln knows there is unfinished business to attend to.

With Lincoln, every single word has a purpose. There are many levels of meaning to everything he says. To help you think about the exhibit and the speech we list those clauses below, followed by a short discussion of at least one way to understand what he is saying in that clause. But, it is only a starting point for thinking about the deeper meaning and there is no such thing as a definitive explanation for anything Lincoln says. Every time one reads the second inaugural the observant reader realizes a new level of understanding or sees another way to interpret some part of the speech.

1. At this second appearing, to take the oath of the presidential office, there is less occasion for an extended address than there was at the first. Then a statement, somewhat in detail, of a course to be pursued, seemed fitting and proper.

Lincoln’s first inaugural was lengthy. He still hoped war could be prevented. He reminded the south that he was no threat to their “institutions” and that his sole objective with regard to slavery was its containment in those states in which it currently existed. He went on to say that he intended to hold all federal property in any state, thus refusing to attach any legitimacy to the Confederate States of America. Then, he closed by reminding all that we are one nation, with common bonds of affection and loyalty and that we should not break those bonds. He appeals to calmer heads, but by this point the south is not listening.

2. Now, at the expiration of four years, during which public declarations have been constantly called forth on every point and phase of the great contest which still absorbs the attention, and engrosses the energies of the nation, little that is new could be presented.

Lincoln immediately tamps down any notion that this speech will be a victory lap. There is nothing to celebrate. The mood he conveys is intentionally somber.

3. The progress of our arms, upon which all else chiefly depends, is as well known to the public as to myself; and it is, I trust, reasonably satisfactory and encouraging to all. With high hope for the future, no prediction in regard to it is ventured.

Lincoln knows he has to say something about “the progress of our arms,” but he then says almost nothing. He does not call attention to himself. He does not try to rally the country for the final push. He has something else to discuss.

4. On the occasion corresponding to this four years ago, all thoughts were anxiously directed to an impending civil war. All dreaded it – All sought to avert it.

5. While the inaugural address was being delivered from this place, devoted altogether to saving the Union without war, insurgent agents were in the city seeking to destroy it without war – seeking to dissolve the Union, and divide effects, by negotiation. Both parties deprecated war; but one would make war rather than let the Union survive; and the other would accept war rather than let it perish. And the war came.

Lincoln makes clear that the south lit the fuse and started the war. Lincoln had made clear in his first inaugural that he was willing to tread softly in the southern states, except with regard to federal property. He had hoped to bring the southern states back into the fold by toning down any rhetoric and reaching out. But the southern states wouldn’t hear and shortly thereafter fired on Fort Sumpter.

6. One eighth of the whole population were colored slaves, not distributed generally over the Union, but localized in the southern part of it. These slaves constituted a peculiar and powerful interest.

The first sentence is simply stating a fact. Slavery exists only in the south, but for the south the institution slavery dominates its very being.

7. All knew this interest was, somehow, the cause of the war. To strengthen, perpetuate, and extend this interest was the object for which the insurgents would rend the Union, even by war; while the government claimed no right to do more than to restrict the territorial enlargement of it.

The war is about nothing but slavery. Without saying it directly, Lincoln dismisses the new rationale of states’ rights, which he knows means nothing more than states’ rights to have slaves. Lincoln also reminds the country that he never demanded abolition; he had been willing to settle for keeping slavery out of the territories. But, this was not enough for the slave states; they insisted that slavery be extended into the territories and thus effectively nationalized.

8. Neither party expected for the war, the magnitude, or the duration, which it has already attained. Neither anticipated that the cause of the conflict might cease with, or even before, the conflict itself should cease. Each looked for an easier triumph, and a result less fundamental and astounding.

At the beginning, both sides thought that any conflict would be short in duration. Lincoln called originally for ninety-day enlistments to quickly “put down the rebellion.” The south thought it could quickly repulse northern “invaders” and that the north would have no stomach for a protracted struggle. Each side underestimated the determination of the other. Few considered that the war would result in the eradication of slavery. But, the protracted struggle set up the end of slavery as it resulted in Lincoln’s issuance of the emancipation proclamation in January 1863.

9. Both read the same Bible, and prey to the same God; and each invokes His aid against the other. It may seem strange that any men would dare to ask a just God’s assistance in wringing their bread from the sweat of other men’s faces, but let us judge not that we be not judged.

In a few short lines, Lincoln first reminds us all of our common heritage; he then alludes to the gross injustice of slavery, but then reminds the self-righteous to be careful in their judgments, because their hands might not be as clean as they would like to believe.

10. The prayers of both could not be answered; that of neither has been answered fully. The Almighty has his own purposes. “Woe unto the world because of offenses! For it must needs be that offenses come; but woe to that man by whom the offense cometh!”

Lincoln is forgiving and non-judgmental himself, but he reminds the guilty that they are nevertheless responsible for their choices and that they have to answer to a higher authority.

11. If we shall suppose that American Slavery is one of those offenses which, in the providence of God, must needs come, but which, having continued through His appointed time, He now wills to remove, and that he gives to both North and South, this terrible war, as the woe due to those by whom the offense came, shall we discern therein any departure from those divine attributes which the believers in a Living God always ascribe to Him?

While it may be true that the south lit the fuse and started the war, we are all, both north and south, responsible for slavery. It was imbedded in the constitution; we all enjoyed inexpensive materials made possible by slavery; many in the north were as deeply racist as many in the south. For this complicity, God has visited the war on all. This was the larger truth Lincoln insisted on telling. He knew that insisting on this truth would not be popular, but he also knew there was no true putting the country together again until it had been acknowledged and accepted.

12. Fondly do we hope – fervently do we pray – that this mighty scourge of war may speedily pass away. Yet, if God wills that it continue, until all the wealth piled by the bondman’s two hundred fifty years of unrequited toil shall be sunk, and every drop of blood drawn with the lash, shall be paid by another drawn with the sword, so it must still be said “the judgments of the Lord, are true and righteous altogether.”

This is a rare glimpse of an angry Lincoln. Hundreds of thousands of young men are dead, maimed, wounded because of a cause evil to its core. One can sense Lincoln almost hopes that illicit wealth is destroyed both as our collective due for the institution of slavery and as retribution for those who have been forced to die in order to finally end it.

13. With malice toward none; with charity for all; with the firmness in the right, as God gives us the right, let us strive on the finish the work we are in; to bind up the nations wounds; to care for him who shall have borne the battle, and for his widow, and his orphan – to do all which may achieve and cherish a just, and a lasting peace, among ourselves, and with all nations.

This is both the most famous and the most misunderstood portion of the speech. Lincoln is not simply saying, let bygones be bygones and let’s all be friends. Having earlier told the truth which he believed needed to be told, Lincoln can now set the stage for reconciliation. But, he knows that true reconciliation can come only after the south has come to grips with its responsibility for starting the war and the north has come to grips with its complicity in the industry of slavery.

Note that he does not talk of caring only for Union men who have borne the battle. He is actually talking about caring for Confederate soldiers, their widows and orphans as well. Finally, note that after looking inward for the last twenty years focused on the political and physical conflict over slavery, he ends with a suggestion that we can finally begin to again look outward when he talks about peace with all nations. 40 days later he is assassinated.

Questions to think about when you visit the exhibit.

Why does the exhibit begin with a bust of Thomas Jefferson?

Why is the exhibit entitled, “The American Ideal”?

The quote from Jefferson Davis under clause #4 says that he tried for 12 years to prevent war. Did he?

How many times does Lincoln use the word “I”.

Both Lincoln and Jefferson Davis use the passive language “and the war came.” Why do they do so? Do they do so for the same reason or for different reasons?